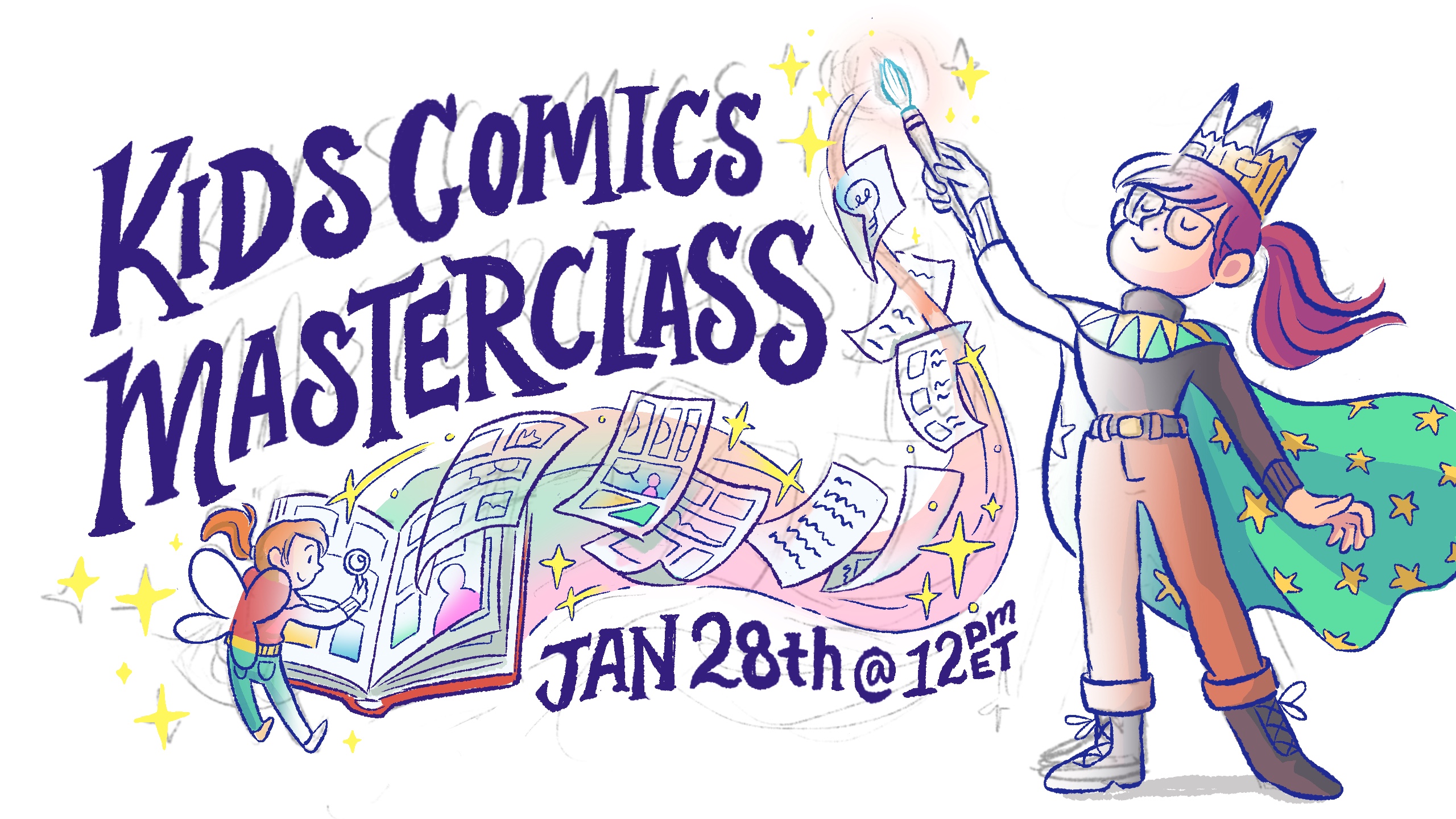 Hey, hey, hey folx! Jade here. I do behind the scenes work on KCU’s art direction. Last year I shared how the Intensive graphic was made in all its messy initial proc-mess. This year I wanted to show how the Masterclass illustration was created.

From the start it was concepted rather quickly! During our kick-off meeting Rivkah sketched an idea she had of herself holding a scepter that magically displayed the process of creating a graphic novel, and Janna as a fairy reviewing the pages. Here is Rivkah’s initial sketch:

Whoop! Now, all I had to worry about was the specifics. I first drew a full body pose, figuring I would have more options of cropping.

Rivkah is shown as a comic wizard queen, but I didn’t want an ordinary crown. Let’s throw pencils in there! Here were my iterations:

I asked Rivkah which she preferred and landed on number 1. Feeling that the left arm was getting lost in the pencil crown we decided to shift it down to create a stronger silhouette. We also preferred Janna’s pose in number five, as she looked more engaged and in action.

During our conversation Rivkah liked the idea of the crown be made of paper — to make it look makeshift, like a kid who drew and taped one together. I always wonder at creation and it’s connection with our inner child at play, guided by adult wisdom. The illustration had already been leaning that way so it was easy to add in tape.

Here is the final sketch with a last minute change of the scepter becoming a brush. Notice my lines are less sure with Rivkah’s hands and feet — I always, always need reference to get those tricky digits right, but the main blueprint is there!

Now for the text. Oy. Sometimes it can come fast and quick, and other times it takes a while to fiddle with in the defined space you have. This time it was the latter. Placement really is key. Luckily, I did have some inspiration on how I would hand letter the type! Here is an old piece I did that I referenced to get a similar feeling:

Here is a snippet of the process thank’s to Procreate’s handy recording feature:

Once that was in, I inked the rest. The flow of the papers took the longest to get right. They can be deceptively difficult to place. I didn’t want too many or it would busy the space and you want to indicate the air movement “realistically” ‘nough to be believable. The final outcome:

We have a set of brand colors to use, but as I plugged them in, I noticed the purple was too dark and knew I’d need to do some finagling. It was the new year, so why not deviate a bit from the palette? Famous last words.

As I flatted and messed with color I noticed the way the brush magic felt off. Instead of a pulsating wave — let’s do emitting ink!! (now that I look back it was definitely inspired from the old bird magic piece from before) Here is a looksy of that inbetween:

I erased the outlines from some sparkles and Janna’s wings since it just busied the space. I added shadows.

Now for color play. I go in with an alternate color relationship in mind and see what I like. For example, in this one the background is yellow and I had her in purple. Good contrast, but what if I wanted more of a warm red? I select the color, drag it in, and play with the ColorDrop threshold:

Now instead of contrasting, this set is more analogous.

I didn’t go with this but thought’d be interesting show nonetheless.

This is where I get stuck in decision paralysis. The amount of color possibilities are ENDLESS. And I had already spent so much time on it, my eyes were swirling. I knew I had to cut away. So, I stopped and came back the next morning with a fresh pair of eyes.

I hid away the pages, Janna, and Rivkah color layers to focus my attention on the magical effects coloring. Choosing these colors helped to dictate the rest of the palette changes.

It really helped. I narrowed it down to three color iterations!

Finally! These took hours to create and balance. It’s what I get for deviating from our main palette 😅 Experimentation is so fun, but oh SO time consuming.

Here is a peek at my Procreate layers:

In total this took about 12-15 hrs to complete over a three day span. Colors are my kryptonite.

p.s.s. Janna just did a real cool article on all that we did in 2022! Boy was it a doozy, but we have so much farther to gooooo!

p.s.s.s. The Intensive Scholarship deadline is Jan. 23rd — if you would like to attend this year’s Intensive with some help. Check out Intensive deets here.

p.s.s.s.s. For reading all the way down, here is a random sparrow (chickadee?) staredown. They really wanted a piece of my danish as I was writing this.

I am a non-binary storyteller who dreams of one day owning a mango tree. I grew up as a military kid traveling the U.S. and Europe. We never stayed at one place more than three years but between all those moves Studio Ghibli films and magical girl anime were my constants. I love fantasy, magical realism, & slice of life with queer and whimsical characters. I want to work on projects that balance humor, hardships, and heart!