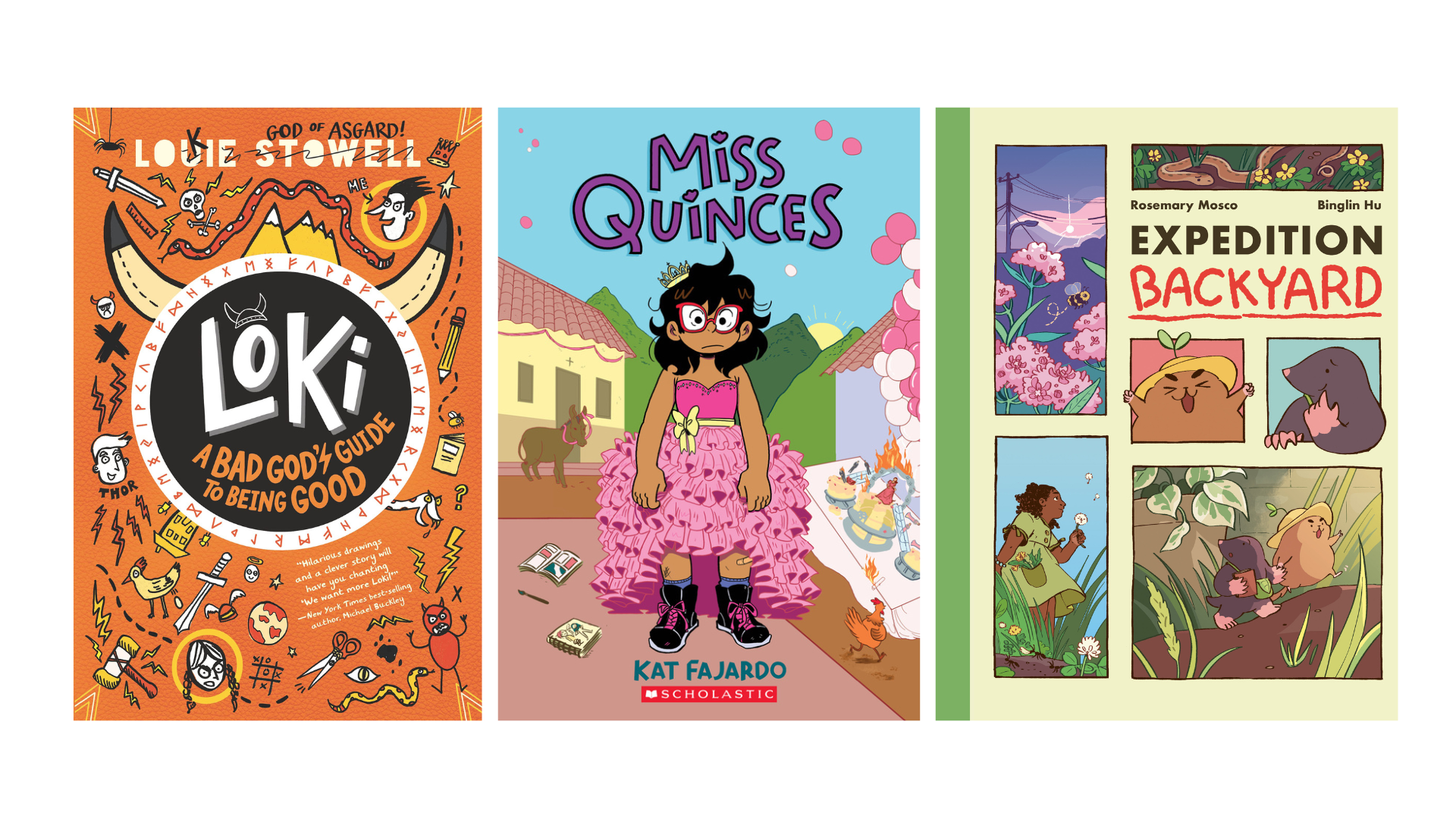 On June 29th at 12:30-1:30pm EST join us for our June Book Launch!  We welcome an amazing panel of graphic novel creators:

Here is the replay:

Check out their books!

Loki: A Bad God’s Guide to Being Good

After one trick too many, Loki is banished to live on Earth as a “normal” school boy. Forbidden from using his AWESOME godly powers, Loki must show moral improvement. As he records his lies THE TRUTH in his magical (judgemental) diary, it becomes clear Loki hasn’t a clue how to tell good from evil, trust from tricks, or friends from enemies.

Louie Stowell started her career writing carefully-researched books about space, Ancient Egypt, politics and science but eventually lapsed into just making stuff up. She likes writing about gods, dragons, wizards, vampires, fairies and parallel worlds. She lives in London with her wife Karen, her dog Buffy and a creepy puppet that is probably cursed.

Sue just wants to spend the summer reading and making comics at sleepaway camp with her friends, but instead she gets stuck going to Honduras to visit relatives with her parents and two sisters. They live way out in the country, which means no texting, no cable, and no Internet! The trip takes a turn for the worse when Sue’s mother announces that they’ll be having a surprise quinceañera for Sue, which is the last thing she wants. She can’t imagine wearing a big, floofy, colorful dress! What is Sue going to do? And how will she survive all this “quality” time with her rambunctious family?

Kat Fajardo (they/she) is an Indie-Bestselling cartoonist who loves making playful art about self-acceptance and Latine culture for young readers. Kat is known for their self-published autobiographical zines like Gringa! and Bandida, as well as designing covers for several middle grade books. They currently live in Austin with their partner and two incredibly cute pups. Their newest graphic novel is MISS QUINCES (or SRTA QUINCES), is out from Scholastic-Graphix in English and Spanish editions.

Each day, Mole and Vole venture out into the world – never forgetting their nature journal! – to see what they can find in their own backyard. From pigeons and jumping spiders to swamp milkweed and maple trees, these two explorers get to know every part of their local environment. But after an accidental move from the country to the city, Mole and Vole worry that everything will be different. As they explore, they discover plants to look at and animals to meet in their new home as well.

The story of these two best friends brings to life a nonfiction adventure of finding wonder in nature everywhere – no matter where you live. This book concludes with fun activities for kids to do at home.

Rosemary Mosco (she/her) makes books and cartoons that connect people with the natural world. Her Bird and Moon nature comics won the National Cartoonists Society’s award for Best Online Short Form Comic and were the subject of an award-winning museum exhibit. She makes best-selling science books for kids and adults and gives keynotes at birding festivals. She’s written and drawn for The New York Times, Audubon, PBS kids’ Elinor Wonders Why, Ranger Rick, and more. She’s represented by Seth Fishman. Her favorite glacial landform is the esker.

Binglin Hu (they/he) {pronunc. bing-ling}, is an Ignatz award-winning cartoonist, illustrator, and designer. They make art for all ages (including adults), and their work pulls inspiration from fashion, wildlife, mythology, and lived experiences as a gay and trans second-generation Chinese-American immigrant. They reside in Baltimore MD with their wife and fellow artist, Ashanti Fortson.

This is a free event to all of KCU! Click here for the event link.

If you aren’t a member it is free to sign up!

Janna Morishima is the founder of Kids Comics Unite and a literary agent who specializes in graphic novels and visual storytelling. She started her publishing career at Scholastic, where she was one of the co-founders of the Graphix imprint. She then became director of the Kids Group for Diamond Book Distributors, where she worked with publishers such as Marvel, Dark Horse, and Oni Press, and helped launch Françoise Mouly’s Toon Books imprint. In addition to her background in publishing, she has worked as an associate producer for documentary films, and as an assistant teacher in a kindergarten and a teacher in a high school for teens in the juvenile justice system. She later launched and ran the NYC Department of Education’s “NYC Reads 365” literacy initiative.

KCU Pitchfest 2022 IS OPEN for registration! Event tickets close on 12/2. Sign Up!