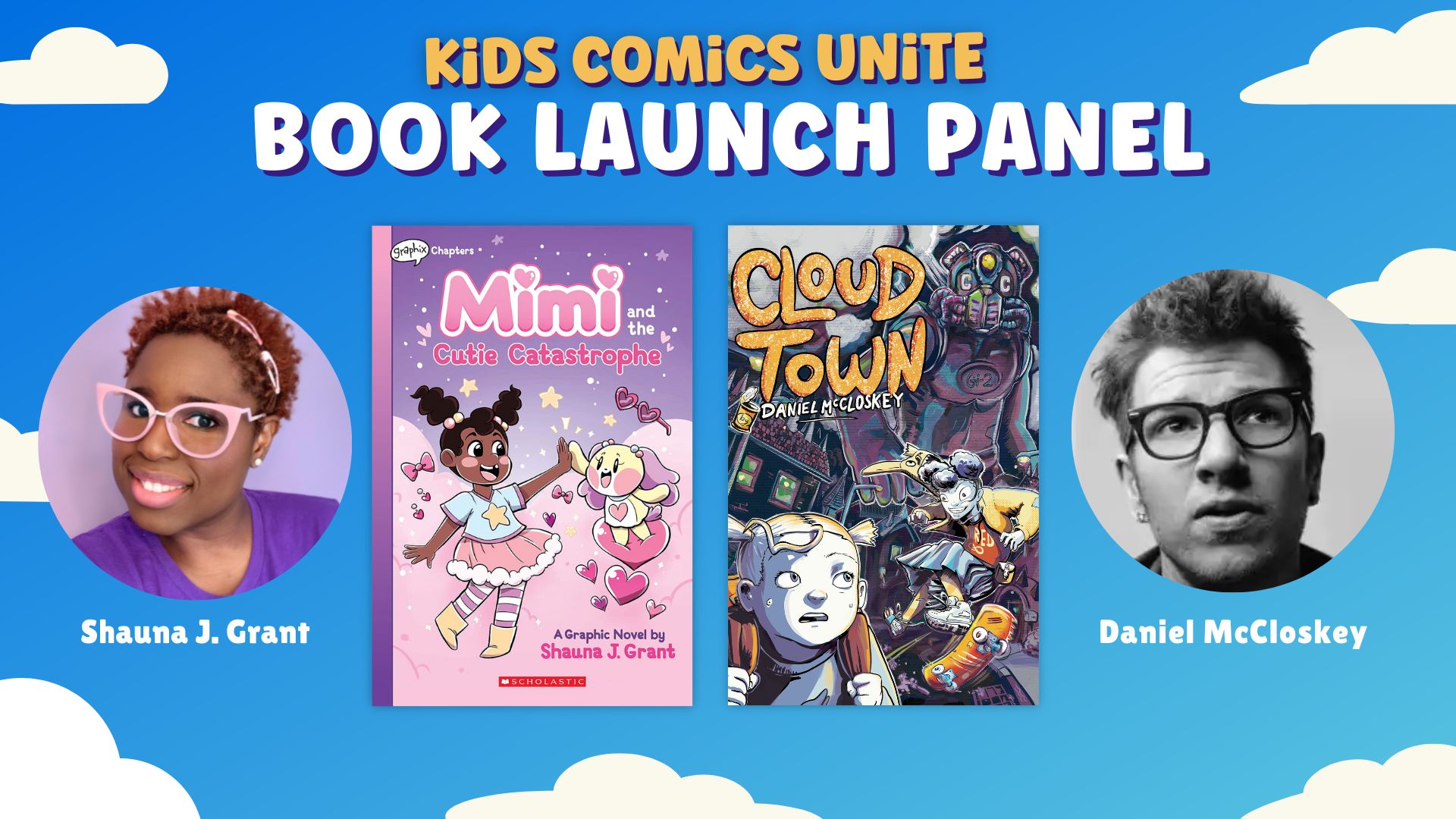 Meet comics creators Shauna Grant and Daniel McCloskey in this in-depth look at their debut graphic novels, MIMI AND THE CUTIE CATASTROPHE and CLOUD TOWN!! Shauna and Daniel will discuss their journey to publication, how they developed their signature styles, and what’s on the horizon for each of them! These are two up-and-coming artists you don’t want to miss!

Check out their books!

Mimi and the Cutie Catastrophe

But that’s not all! She’s also a loyal friend and fun playmate, who has the best adventures with Penelope, her magical toy dog. But when Mimi notices people treating her like she’s too cute, can she show them that she’s much more than meets the eye? Or will she be stuck in this cute-astrophe?

Shauna J. Grant is a cartoonist who creates cuteness! With a love for all things pink and magical, Shauna is on a mission to add diversity to the comics community by creating stories that feature Black girls as the heroines of their own adventures. Shauna is the creator of Graphix’s brand new early readers graphic novel, Mimi and the Cutie Catastrophe, as well as the artist of First Second’s History Comics: Rosa Parks and Claudette Colvin. Her work has appeared in Black Comix Returns, Noisemakers, and the Secret Loves of Geeks, and she’s featured in Dr. Sheena Howard’s Encyclopedia of Black Comics. Shauna enjoys spending her downtime daydreaming, reading Korean comics, and playing with her own magical dog, Sugarpaws. Shauna casts cuteness into the world via her comics from her home in New York, the place she was born and raised.

In Dan McCloskey’s debut graphic novel, best friends Pen and Olive live in Cloud Town, an impoverished community on Floating Island, a mysterious landmass that drifts above the earth and happens to sit dangerously close to the Rip—a tear in the fabric of the universe. No big deal or anything.

While Pen is brash and brave, Olive is quiet, kind, and also fearful of bullies at school. That is, at least until the day they are nearly squashed by a Care Corp Storm Catcher, a giant android built to protect Cloud Town and the rest of Floating Island from Hurricanes, monsters that travel across the Rip. It isn’t the event itself that changes the girls’ relationship. It isn’t the fear of death that drives them apart, or the questionable decision-making that leads Pen to drag Olive into the cab of the crashed robot. It’s the fact that Olive can move the 90-foot-tall machine and Pen can’t. Care Corp recruits Olive to train as a pilot, so that she can protect Floating Island when the next attack comes. It’s a role reversal, for which neither of the girls are prepared.

Dan McCloskey is a writer and graphic artist based in the San Francisco Bay Area. He is a recipient of the Creative Development Grant from The Heinz Endowments and The Pittsburgh Foundation. He also received the Small Arts Initiative Grant to promote reading as performance via the Cyberpunk Apocalypse Writers’ Project, which he founded in Pittsburgh, Pennsylvania. McCloskey’s a consummate zine maker and cartoonist. Cloud Town is his debut graphic novel.

Janna Morishima is the founder of Kids Comics Unite and a literary agent who specializes in graphic novels and visual storytelling. She started her publishing career at Scholastic, where she was one of the co-founders of the Graphix imprint. She then became director of the Kids Group for Diamond Book Distributors, where she worked with publishers such as Marvel, Dark Horse, and Oni Press, and helped launch Françoise Mouly’s Toon Books imprint. In addition to her background in publishing, she has worked as an associate producer for documentary films, and as an assistant teacher in a kindergarten and a teacher in a high school for teens in the juvenile justice system. She later launched and ran the NYC Department of Education’s “NYC Reads 365” literacy initiative.

KCU Pitchfest 2022 IS OPEN for registration! Event tickets close on 12/2. Sign Up!